A few weeks into Navy boot camp training, Kelsey Gumm passed out. Then 17, she was taken to the hospital, where she was told she’d overexerted herself and was dehydrated. She rested and returned to her exercises.

When the episodes repeated themselves, nothing was detected. When she complained of chest pressure, she was told it was probably anxiety.

But a fainting spell in February 2014 offered clues that Gumm had a much more serious condition. At the time, Gumm was in the gym working out on the elliptical when she passed out and crashed to the floor.

“The room suddenly went black and I couldn’t feel my arms and legs,” she said.

When Gumm came to, one colleague remarked that her coloring looked grey, a detail she shared when she arrived at the hospital, along with the numbing sensation she experienced in her extremities. This time, Gumm was referred to a cardiologist.

Tests revealed that Gumm had a serious heart defect that left her heart muscle weak and unable to pump blood normally.

“The doctor came in and said, ‘Petty Officer Gumm, your career in the Navy is over’,” she said.

“I was in the best shape of my life and had no history of heart disease,” she said. “Now I had this diagnosis that I thought meant I would be unhealthy for the rest of my life.”

One in three women is living with some form of cardiovascular disease. Gumm’s heart condition was sending her into a dangerous heart rhythm called ventricular tachycardia, so she got an implantable cardioverter defibrillator, a device that acts as a pacemaker, shocking her heart back into rhythm if she experiences a cardiac arrest.

At 27, Gumm was retired from the U.S. Navy for medical reasons and found herself sitting on the couch watching TV, gaining 50 pounds in the process.

“I didn’t care what I ate, I figured, ‘What’s the point?’” she said. “They told me I had an uncertain life expectancy, and the only way to cure my condition was a heart transplant.”

After a couple years, Gumm enrolled in college and tried to rebuild her life. She was helping plan an event for veterans in June 2018 when she was inspired to participate in a 30-mile bike ride with amputees and other veterans. She checked with her doctor, who advised her to take it easy and stop if she felt overly tired.

“After I parked my bike, I realized heart disease is not a death sentence, it’s just another way to look at my life,” Gumm said.

Gumm was sore from the ride, but the experience changed her outlook and motivated her to ease back into physical activity and take a harder look at her eating habits.

Today, living in Mt. Pleasant, Wisconsin, Gumm bikes 100 miles each week and has overhauled her diet, eliminating sugary drinks and processed foods. Her efforts paid off, resulting in a 35-pound weight loss and more energy.

“I’m taking control of my health,” she said.

Now 32, Gumm also talks more with her family about heart disease and encourages others to commit to making their heart health a priority by eating smart and being more active. The American Heart Association and the Federal Physical Activity Guidelines for Americans recommend that adults get at least 150 minutes per week of moderate activity or 75 minutes of vigorous activity (or a combination of those activities). In addition, two days per week of moderate- to- high-intensity muscle strengthening activity is recommended.

“You have to enjoy life every day, because you never know when it’s going to be taken away from you,” she said. 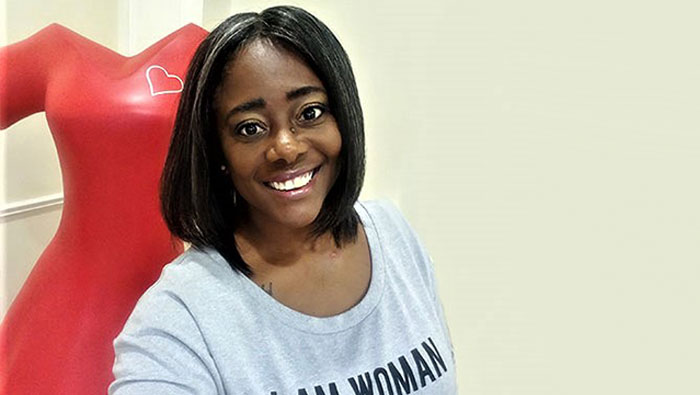